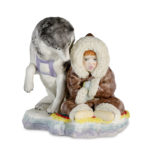 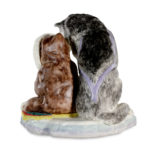 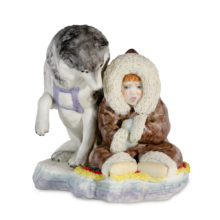 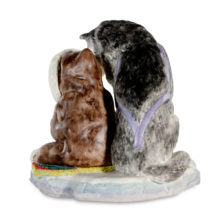 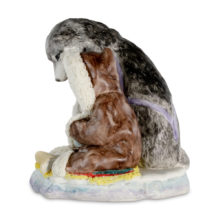 Designed by Danny Osborne, made of porcelain clay, cotton net lace dipped in porcelain clay is applied by hand to Orla’s coat. This figurine is entirely hand painted and is fired 3 times (temperature between 800 and 1290).

When Irelands foremost explorers Danny and Geraldine Osborne went to the Arctic for a year (1989) they took their three young children Oisin, Orla and Tempy with them.

They lived with the Inuit hunters in one of the most isolated communities in the world, nearly a thousand miles north of the Arctic Circle. The family travelled many hundreds of miles over the frozen sea ice on their dog-sledge, and the children thrived on a basic diet of raw seal meat.

During the long winter dark season, Danny made these models – “Orla Floe Hopping” and “Oisin and Friend” – of the children especially for Irish Dresden, as a permanent record of their amazing journeys.

Dressed in traditional caribou skin clothes and sealskin boots, they kept warm living outside for months on end in the snow. Not surprisingly, if was not long before people were calling them: The Snow Babies

We use cookies on our website to give you the most relevant experience by remembering your preferences and repeat visits. By clicking “ACCEPT ALL”, you consent to the use of ALL the cookies. However, you may visit "Cookie Settings" to provide a controlled consent.
Cookie SettingsREJECT ALLACCEPT ALL
Manage consent

This website uses cookies to improve your experience while you navigate through the website. Out of these, the cookies that are categorized as necessary are stored on your browser as they are essential for the working of basic functionalities of the website. We also use third-party cookies that help us analyze and understand how you use this website. These cookies will be stored in your browser only with your consent. You also have the option to opt-out of these cookies. But opting out of some of these cookies may affect your browsing experience.
Necessary Always Enabled
Necessary cookies are absolutely essential for the website to function properly. These cookies ensure basic functionalities and security features of the website, anonymously.
Functional
Functional cookies help to perform certain functionalities like sharing the content of the website on social media platforms, collect feedbacks, and other third-party features.
Performance
Performance cookies are used to understand and analyze the key performance indexes of the website which helps in delivering a better user experience for the visitors.
Analytics
Analytical cookies are used to understand how visitors interact with the website. These cookies help provide information on metrics the number of visitors, bounce rate, traffic source, etc.
Advertisement
Advertisement cookies are used to provide visitors with relevant ads and marketing campaigns. These cookies track visitors across websites and collect information to provide customized ads.
Others
Other uncategorized cookies are those that are being analyzed and have not been classified into a category as yet.
SAVE & ACCEPT